A “heavenly” walk along the coast and through the hills of the old Japanese capital of Kamakura, helped me to take a decision about my future a few years ago, and more recently toclear my thoughts about my next writing project. On 10 October 2010  or 10.10.10  I was rapidly approaching the deadline on when I had to take  decision as to whether to apply for an Early Retirement package from the Foreign and Commonwealth Office for whom I’d be working for the previous 35 years. I was receiving mixed advice from friends and family varying from “You’d be mad not to” to “You’ll be mad to give up such a good job at your age” (I was only 53 at the time).

I really needed to get away from Tokyo which was fogging my thinking process, and the never-ending questions and opinions from those close to me.

In his book “Solitude”, the psychotherapist Anthony Storr, says “The capacity to be alone is a valuable resource when changes of mental attitude are required”. Where better to do this than being alone amongst Zen temples Zen temples?

Surrounded by mountains on three sides, and facing the sea on the other, Kamakura which at the end of the 12th century became the capital city of Japan is home to artists, writers and musicians who draw their inspiration from the rich culture and history of the area, and with more than 200 temples and shrines is also a major tourist attraction. Many of the Zen temples are “working temples” where Buddhist monks continue to live and worship and where the public can attend meditation sessions. Some of the shinto shrines have special meanings, ranging from praying for a partner in marriage, to easy childbirth, to success in exams, and also one for women who wish to get divorced. Most of life is covered if you need divine intervention.

But I was not making the one hour trip out of Tokyo for tourism; having lived there whilst studying Japanese from 1979-80 and again on a revision course from 2006-07 I felt it was more like going home to seek inspiration.

So in October 2010 on a sunny autumnal day with deep blue skies and just a few white clouds hanging over the bay, I walked down to the beach from Kamakura station. Turning left would have taken me back to my old house at Zaimoku-za, but by going right I picked up my old home to school route along the sea-front, enjoying the sea air for 20 minutes as far as Hase, home of the Big Buddha. For 200 Yen you can enter the grounds to see this 13 metre high bronze edifice with eyes half closed calmly facing the sea.

Do thoughts ever trouble his Zen mind one wonders? Inspired by his serenity I walked the 90 minute hiking course behind the site following the route in to north Kamakura and made the decision which hours of discussion with well-meaning colleagues had failed to bring to conclusion.

When talking to my former Japanese teachers about my experience of returning to my seat of learning to seek inspiration about my future they took the numerical significance of the date of my decision one step further by reminding me that one of the Japanese kanji which can be read as ‘ten’ (天)  has the meaning ‘heaven’. Even though I eschew organised religion, in recent years I have felt much more of a spiritual pull in my life, so I thought that my decision was meant to be.

The ‘Daibutsu  (Great Buddha) hiking course concludes in Kita Kamakura. If I’d thought of it then I would have remembered that the other Kamakura Hiking course which completes the loop starts from there and continues east dropping in amongst some of the more remote but well worth visiting shrines and temples. This course is known as the Ten-en (天園) or heavenly garden hiking course. I’d walked this course only once before on Christmas Eve 2008 with my son,Justin, visiting from London.

At New Year Japanese families traditionally visit a shrine either at midnight or sometime during the following few days to say the first prayer of the year. Living close to the famous Meiji Shrine in the centre of Tokyo we have in past years often joined the queues to wait for an hour or so before being ushered forward to the shrine to throw our coins, bow, clap hands, pray and bow again. Depending on the length of one’s divine deliberations, the process can last only a few seconds to a minute or two. This year, being on my own once again, I decided to give the ‘rush hour’ a miss and to visit Kamakura for my own spiritual devotions for 2016. Taking an early train to Kita Kamakura I left the station and followed the tracks past Engaku-ji and Meigetsu-in where even at that early hour the crowds were beginning to gather. So I gave them a miss this time even though they are both well worth a visit. A map shows that you can pick up the hiking trail by cutting up behind Meigetsu-in through the residential area and this is the route Justin and I took 7 years ago. However I wanted to go to Kencho-ji temple and start my hike from there.

Not only is Kencho-ji the first ranked of the five great Zen temples of Kamakura, but also it is one of my favourites. After entering the temple and paying the entrance fee of Yen 300, I skirted round to the left of the magnificent Somon and Sanmon gates for the long flight of steps up to Hanso-bo the protecting shrine of Kencho-ji. With crystal clear winter air I had a fantastic view of snow-topped Mt Fuji dominating the skyline across Kamakura Bay.

With less than two weeks to go before my next hospital appointment to discuss the operation to remove the metalwork from my ankle I had to take the route fairly easy especially over the steeper rocks where I have a tendency to slip if not very careful. I didn’t want any set-backs this close to finally getting my injury sorted out. But I’d also told my former teacher and friend Mrs Okado that I’d call in on them for tea when I completed the course so didn’t want to be too slow.

I needn’t have worried or put pressure on myself (as is my wont), so adopting a more ‘mindfulness’ approach to my walk I made steady progress and within an hour was at the highest point of the course and shortly thereafter the ten-en tea house. This is no traditional Japanese tea-house with tatami mats and shoji paper screens and kimono clad ladies performing the cha-do tea ceremony. An open air collection of shacks and a few stoves was all that there was. 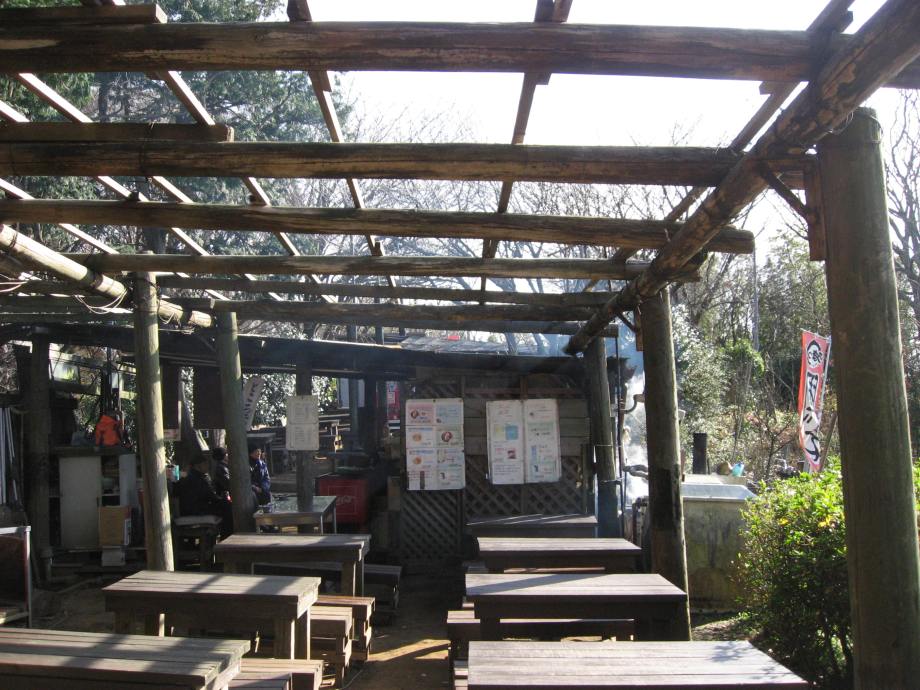 For a hot drink one has to rely on the vending machines. But it did its job and made a welcome break once again set off with views of Mt Fuji. And from here it was downhill all the way, although soon after leaving the tea house the path split and I wanted to take the left hand route to Zuisenji temple and Kamakura-gu shrine which was my chosen destination.

There was a real sense of returning to civilisation from here on in, not least in passing a golf course and finally seeing houses along the course. I completed the 4 km course in just on the 2 hours which may seem slow but given the sometimes steep and rocky nature of the route I was happy to have got round what was my most difficult walk alone since injuring my ankle.

Both Kencho-ji at the start of the course and Zuisen-ji at the end are Buddhist temples so don’t really ‘count’ when it comes to the New Year worship rituals which should take place at the Shinto shrines. But in a country where religions are very intertwined, and given my own secular approach to life, I was able to find a few minutes peace in Zuisen-ji, the main feature of which is a hug cave called Tennyodo excavated in the rock to the north of the shrine.

I was glad that I opted for Zuisen-ji  as the crowds were queuing at Kamakura-gu shrine when I passed it after a simple soba (buckwheat) noodle lunch.

Apart from the physical benefits of this hike, once again the time alone in the hills above my beloved Kamakura allowed me to get clarity on the novel I want to write which I’ve been struggling with for some time now. So having reached a decision on my retirement, this here Hill was able to make another decision on his passion in them there hills.