I went to the monthly free lunch-time recital in Tokyo Opera City yesterday attended mainly by the retired gentlefolk of the area. Usually these are fairly sedate events  with a short  30 minute programme of baroque chamber music and no calls of Bravo or enthusiastic encouragement of encores. So yesterday with a programme of Irish music on the agenda I was looking forward to something different.

A talented trio playing violin/fiddle, Irish flute/tin whistle and guitar took the stage  and immediately launched in to a lively set of “The Lark in the  clear air”  and “Tripping up the stairs”. Despite the guitarist marking the beat with some enthusiastic foot-tapping and my own leg picking up the rhythm, the audience remained stony faced  and applauded  lightly at the end. “Danny Boy” was much more to their liking as they recognised it compared to these unknown Celtic tunes. Another set described as “Jigs” also failed to get much response  and the man sitting next to me was dozing by this stage. I just wanted to join in with a tabor or even spoons to transfer some of the energy from the performers to the audience.

The finale was “Amazing Grace” – which is played at many concerts in Japan; so this got some “ahs” and knowing nods indicating that most of the audience were still alive.

Cherry blossom time in Tokyo, and despite the fact that this happens every year the Japanese people still get very excited following the passage of the sakura as it opens in the warmer southwest and gradually spreads throughout the country. The peak is the day on which it is “mankai” or fully open.

For the Japanese, this is also a great chance for a party, and from early in the morning they head to the local parks or riverside with plastic groundsheets to set themselves up for a day’s eating and drinking. Special food and drinks are also produced from seasonal lunch-boxes to special cherry blossom ice cream, the common theme

being it’s all very pink.

The other custom is to find and photograph the “perfect”  tree or petal. I’m just taken in by the enormity of it all so am just happy to snap what I like.

The lights go down, a cheer goes up, and the Japanese salaryman loosens his tie off a little when Sir Mick Jagger struts on to the stage of the Tokyo Dome which is “On Fire”.

The Rolling Stones concert has started as has an excellent period of British rock Gods visiting Japan as this grateful expat re-lives his long lost youth. The  next two and half hours was pure energy and noise. Mick, Ronnie, Charlie and Keith with Mick Taylor guesting raced (Iiterally in Mick J’s case) through a set-list  starting with Get Off Of My Cloud to a firework finale of Sympathy for the Devil. By this time the heat was getting too much for the salaryman who had removed his tie completely.

Concerts here finish promptly, and it’s not surprising really as 50,000 people had to make their way out of the Dome and on to the subway system which is crowded enough at the best of times.

Two days later and only two years younger than the Stones’ front man, Eric Clapton strolled on to the stage of an equally packed Budokan for his final night of his 40th anniversary tour. His supporting band seems to change every time he comes here, but Paul Carrack on keyboards and vocals was an impressive bluesman. Although Eric is world famous for his electric guitar work, when he goes unplugged, which he did for Layla and Tears in Heaven the emotions from this sensitive man really show through. It was during this acoustic period that he thanked the Japanese audience for letting him play in “the best place in the world” for the last 40 years. In his early days he was not allowed to sing “Cocaine” in Japan, but for his final song on the final night of possibly his final concert in the Budokan he had the entire audience on their feet singing along to a rousing chorus.

And next up in the list of iconic British rock heroes to visit Japan? It’s going to be a difficult choice between Jeff Beck, Deep Purple and Asia.

We went to this morning’s Wild Bird Society of Japan monthly gathering in Meiji Jingu thinking it would be an “interesting experience”. After the heavy snowfall  two days ago we weren’t sure what if anything we would see.

With a lot of the snow already turning very slushy especially on a sunny and warming-up Sunday morning  good footwear was essential. I was also pleased I took my walking stick along, as some of the shady areas were still very icy and slippery.

The snow as well as a lot of fallen trees and debris meant that we couldn’t follow the normal route around the gardens. We even had to miss out on the usual visit into the Inner Garden where we sometimes get lucky and spot a kingfisher or two over the fishponds.

But we weren’t disappointed as far as today’s “haul” was concerned. Of course the ubiquitous brown-eared bulbuls, jungle crows and sparrows were in evidence. It is interesting that the latter in Japan (and also S.Korea) are actually tree sparrows – much rarer in England than our own house sparrows. In fact in amongst a group of sparrows close to the Treasure Museum we were lucky enough to see a Rustic Bunting. Only the presence of the resident experts who said that it was quite unusual  allowed us to identify it as such as it did merge very much in to the sparrow background. Another first for me in Japan was skylark bringing back memories of them hovering and  singing over the fields in Suffolk as I used to walk to school. The tit family are usually present, and today also common with England we saw both Long-tailed and Great as well as what is becoming one of my favourites here the very tame Varied Tit with russet colouring giving it its name.  Another firm favourite is the (Japanese) White-eye which also brings back memories,  not of England  but Zimbabwe where I first saw these beautiful little birds flitting in the trees. Overhead we watched the aerial battles between a goshawk and the crows with a passing cormorant not getting involved. The White wagtail more or less merged with the wintry background, but the snow did show off the colours of the Eastern Turtle Dove.

Not being able to go in to the Inner Garden meant that we finished earlier than normal, so rounded off the morning with a bowl of  san sai soba (mountain vegetable  buckwheat noodles) before strolling back through Yoyogi Park in the winter sunshine.

I now have 2 pairs of slippers here in Tokyo, 2 pairs at my sister’s house in Northampton and another pair at my parent’s house, also Northampton. But  I woke this morning after another record breaking snowfall bringing the normally ultra-efficient Japanese transport system to a virtual standstill. The poor truck driver who was trying to get up the slope opposite our house made it 50 metres along the road, and then back again. As all this took two hours  he seems to have given up now. I should have gone out to help, but I don’t have any wellies. But if I buy a pair of wellies for the Tokyo snow do I also have to buy a pair for England to wear in the floods and storms that have been sweeping across the country for the last couple of months?

Whether I live in England or Japan  there’s  a lot of weather about. 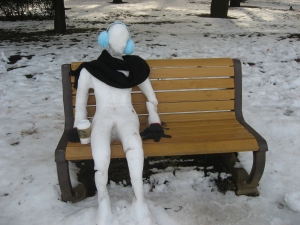 Many years ago when revising for my O Levels (yes, it was that long ago!) I was listening to Radio Caroline, and I heard a wonderful track called “Layla” by Derek and the Dominoes. Last night I got my ticket to go and see Eric Clapton  for the fourth time in the Budokan in Tokyo, for  his fourtieth anniversary tour of Japan – which means he first came here the year after I did my O Levels.

I was listening to Radio Caroline again this morning on the internet, which brought back some good memories as they still play great music. No Clapton today – but I’ve got the real thing in 4 weeks time.

I’ve been back in Japan for a week now after a fantastic Christmas and New Year with family and friends in England. Contrary to the Japanese stereotype of my home country, it is actually colder here than it was in the wet and windy England I left 10 days ago. However winter days are usually sunny and bright with dark blue often cloudless skies so a real contrast to the grey overcast skies I left behind.

The other stereotype I actually love to promote is having an afternoon cuppa, and with a suitcase packed full of Yorkshire’s finest I quickly got back in to the routine- until I broke my tea pot at the weekend. So today’s task was to get a replacement and where better than one of the local 100 Yen shops  a real emporium  of household goods, stationery, kitchen appliances and food and drink – just like Poundstretchers really. Tax is added to the Y100 price tag bringing the actual cost up to an extravagant Y105, which at current exchange rates works out at 61p. Well worth it for this Englishman in Tokyo